Ever since the new Necromunda kits started coming out I’ve been eyeing them up for their potential in Warhammer 40k. Having easy to get plastic kits of diverse human thugs is a boon to converters, especially those who dream of seeing new and creative armies of the Astra Militarum fill tournament tables. Now that all six of the classic gangs have kits, I have started an adventure, taking minis from each kit and converting them for Warhammer. I intend for this article series to act as a guide, showing some of the potential each kit has. Each article will be split into three sections: Paint, Head Swap, and Kit Bash, in order to showcase various levels of complexity.

The Van Saar kit is a boon to 40k overall, because it provides a base for modelling something that has long been part of the 40k lore, but until now rarely presented in model form: the armored bodyglove. Obviously taking a nod from the stilsuits from Dune, I thought a Fremen-style army of Astra Militarum would be cool. 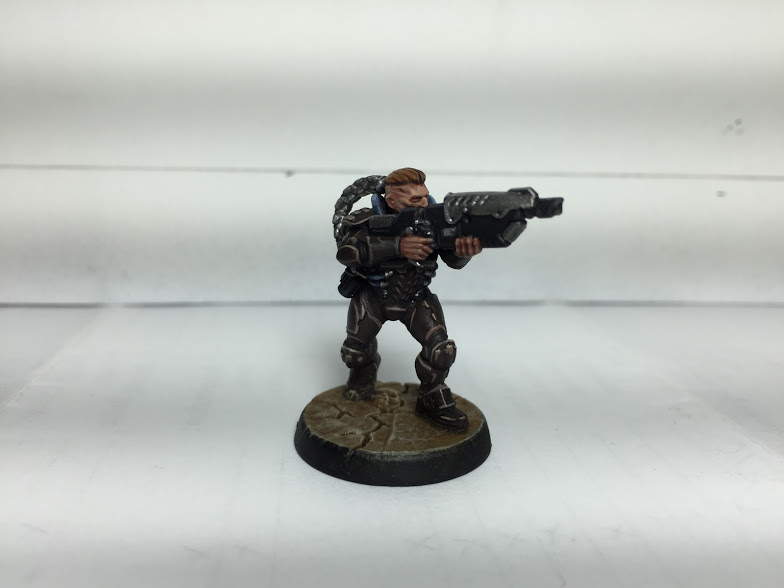 To this end, I simply assembled the model (using one of the GW Shattered Dominion bases), painted it in brown and black, and applied a desert/wasteland palette to the base. My only regret is the mechandrite/ponytail thing, I think that’s so distinctive to the Van Saars that it distracts from my intent (if I were to expand this project I would leave subsequent ponytails off). That said, I’m very happy with the results – just by changing up the paint scheme and (especially) the base, the Van Saars can transform from pseudo-mechanicus hive dwellers into tough-looking death world warriors.
As for the kit itself, Van Saars are an excellent proxy for Astra Militarum. The box contains ten bodies, and each model can be armed with a lasgun (or las carbine, which is just a stumpier SMG-looking version of the lasgun). 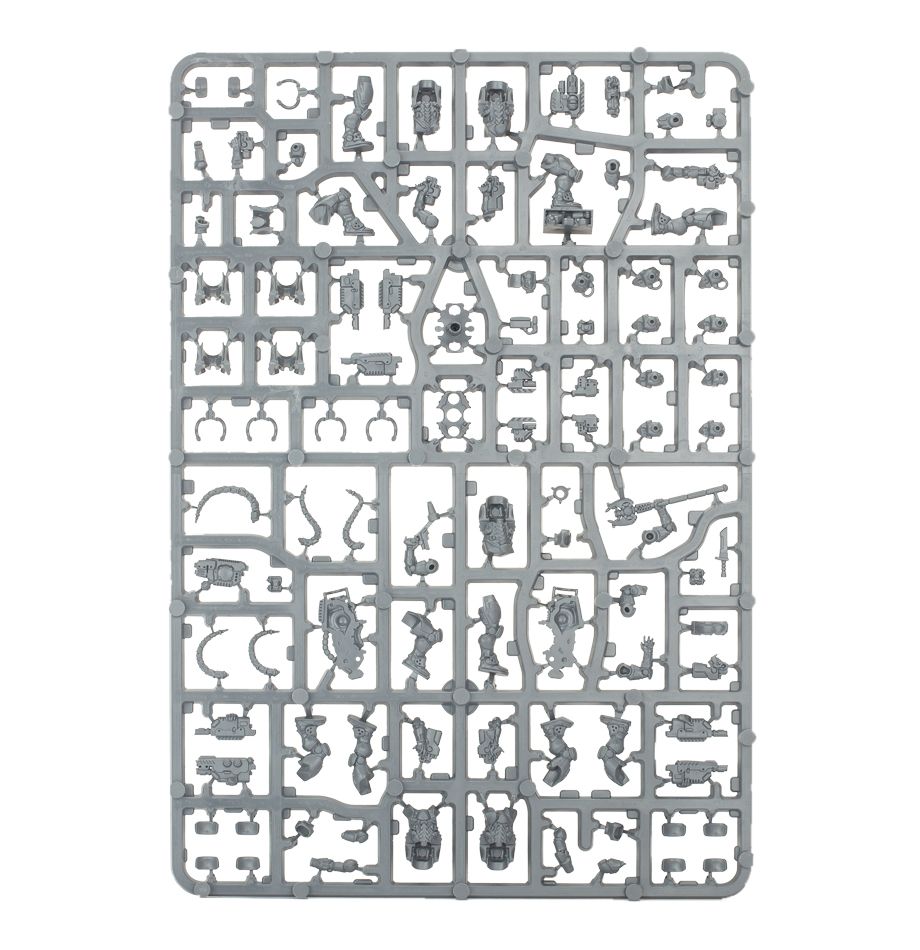 For special/heavy weapon potential there are two interesting opportunities. One is the “heavy” of the gang, which consists of a guy holding a large laser bazooka thing on one shoulder. This could easily stand in for a lascannon, though it lacks the distinctive muzzle of that weapon. There is also a combi-las/melta gun in the kit, which if you snip off the las-barrel, looks just like a fancy bullpup meltagun! There are some pistols in the kit too – laspistols and plasma pistols, namely – for building a sergeant, but the only close combat weapon in the kit is the techno-wizard staff pictured above. Pistol/rod works just fine for a sergeant, but I’m vaguely saddened that there isn’t a sleek chainsabre in the kit.


So, with no other bits or kits required (except for the 60mm base for a heavy weapon team – ed) the Van Saar gang is an excellent base for an Astra Militarum Regiment.

I was a little underwhelmed when I first saw the new Orlock kit. The bodies are blocky, the arms are lanky, the boots are huge, and the heads are tiny. Frankly I think it’s the worst-looking of the new Necromunda kits… which is to say, it’s a fine kit, containing lots of cool bits and conversion potential. I feel like my hobby is an embarrassment of riches sometimes! For this mini I decided to change the character of the sculpt through a simple head swap. Orlocks are a good choice for this, as unlike some of the other kits their neck joint can easily take heads from other kits. Looking at the Orlocks and their “blue collar workman” aesthetic, I formed a sympathetic bond in my mind between their look, and the genestealer cultists. Both have a mining theme, both are wearing hazard gear and fighting with improvised weapons, and they have a similar “bulkiness” to them that gives them a thematic similarity. 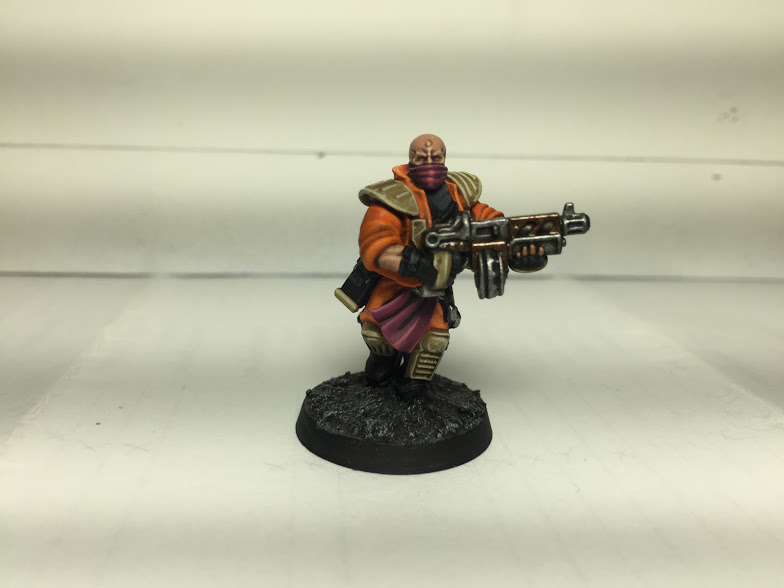 So I did a simple head swap. I used one of the heads from the Genestealer Cult Upgrade Pack. Though meant to be used with Cadians, the heads fit onto the Orlock bodies like a dream (though to be honest I still feel they’re a little small compared to the large blocky bodies). I will note here that I initially looked at using heads from the actual Genestealer Cultist box, but those heads will not fit without significant trimming, as the bulbous “necks” are made to fit in the very deep spacesuit cradles.
The Orlock kit comes with a variety of slug-thrower weapons: 4 autoguns and 6 shotguns, though the only thing characterizing the shotguns is an extra tube beneath the barrel, so having one “count as” the other is pretty trivial, as they are already so similar looking. You also get arms for two heavies, who can be armed either with a heavy stubber (convenient for cultist squads) or a grappling spear-launcher thing, which could reasonably be a “counts as” sort of weapon. As for flamers, web-guns, or any of the other cultist special weapons you’re out of luck.
If you have a specific idea for an “autoguns and heavy stubbers” sort of neophyte squad, the Orlock box can handle that with aplomb, with the only additional bits being a genestealer cult upgrade sprue. You could also field such Orlock/Cultist conversions alongside the regular neophyte hybrids, without a break in aesthetics. Looks good and easy to do! 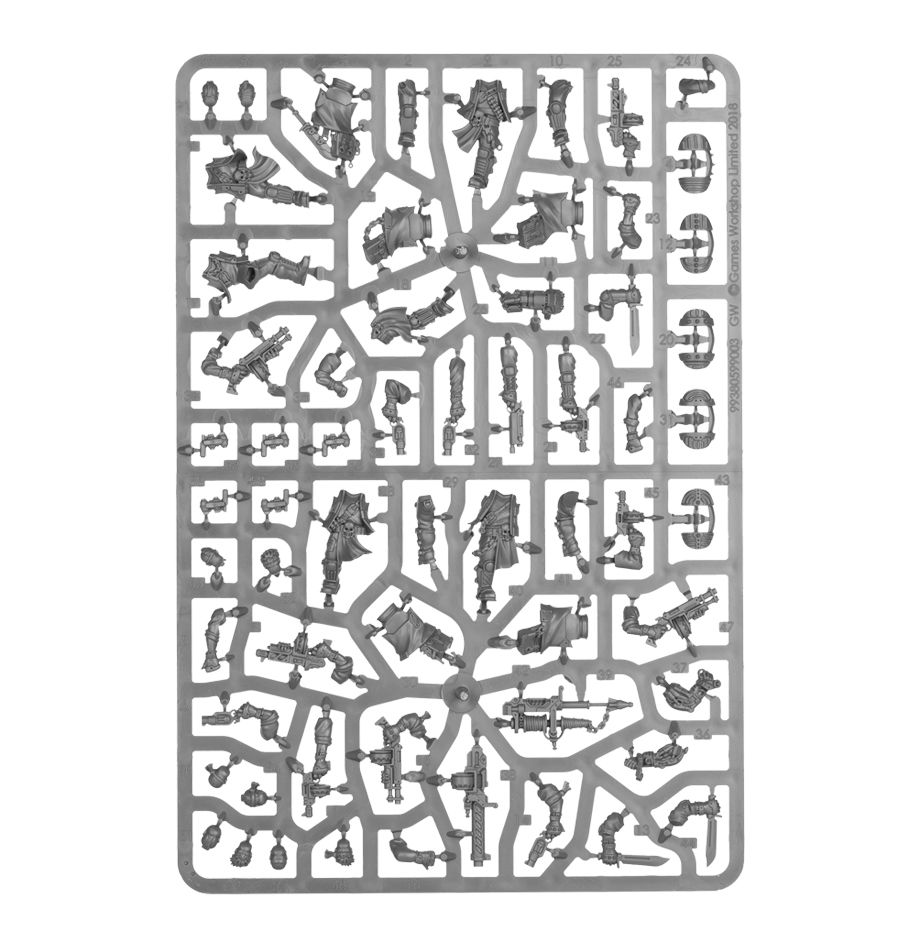 I’ll be the first to admit I did not come up with this idea. It’s been floating around since the Goliaths first got previewed, but it wasn’t until I got the kit in my hands that I really saw the potential. When put next to normal space marines the Goliaths look like enormous mutants, the muscle-bloated swole-bros of Khorne’s nightmares. But when set next to Primaris Marines? Well, they just kinda look like what you imagine Primaris marines look like when not in their armor.
So here we have it: Goliath gangers kitbashed up with some space marine scouts, intended to be fielded as scouts in an all-primaris army. This provides the double advantage of providing some diversity to the tragically same-y primaris models, as well as the tactical boon of including scouts in your army. So with clippers, knife, glue, and (sadly) greenstuff in hand, I took to turning the biggest, loudest, thuggiest necromunda gang into the sleekest, quietest, and most subtle of space marine warriors. Was I successful? 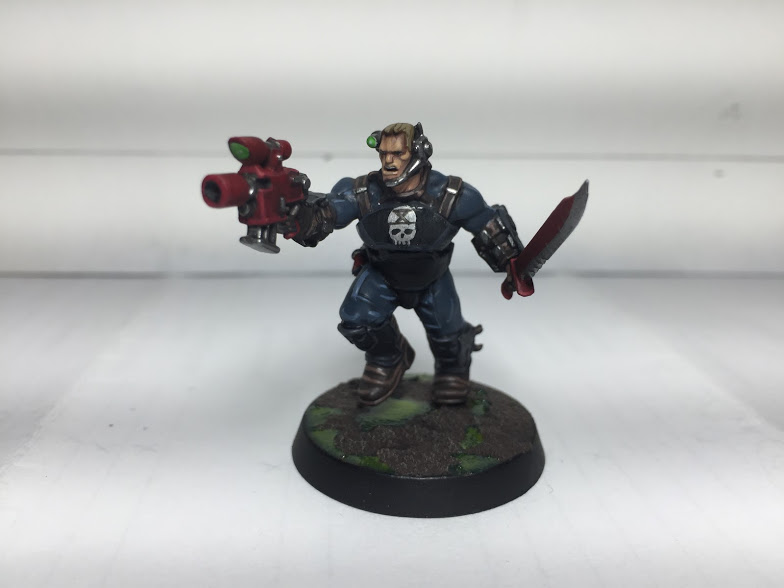 I would say “mostly.” There are two ways to do the head swap, either by dropping the scout head directly into the cradle in the Goliath torso, or by chopping and pasting the scout head to fit the Goliath neck, which comes as a separate bit. I’ve done the latter here, which makes the model look more proportioned and natural (the former technique is easier, but makes the scout look a bit squat and turtle-like). The scout hands do not fit onto the Goliath wrists without a lot of cutting and fitting – on this model I had to use green stuff to patch gaps, and the right wrist is an absolutely ugly mess up close. Also, the Goliath armor is covered with spikes, rims, and vials of chemicals, some of which I had to trim and file down in order to make it look more like military armor. I played around with the idea of placing shoulder pads on the mini to make them more closely resemble the official scout minis, but eventually I decided to leave them off. If you happen to have extra space marine shoulder pads, though, they fit on pretty well.
Like all kitbash projects, this one involves buying multiple kits, which leads to a bad money/models ratio. That said, this kitbash is far better than most, as a single box of scouts (which is meant to make 5 models) provides almost enough bits to convert all 10 Goliaths. The scout box comes with 5 boltguns, 5 shotguns, and 5 bolt pistol/close combat weapons, which means you can make two squads with different armaments. The only issue is heads – only 6 heads come in the scout box. Goliath heads might make for a clash of aesthetics in the squad, but you could get away with some of them. The scout box also provides some grenades and pouches which you can use to further tie the conversion together, like I’ve done on the model’s right shoulder, above.
Using this kitbash will leave you with all the Goliath weapons and the Scout bodies, which will just go into your bits box. A necessary casualty of the kit-basher’s grisly work. 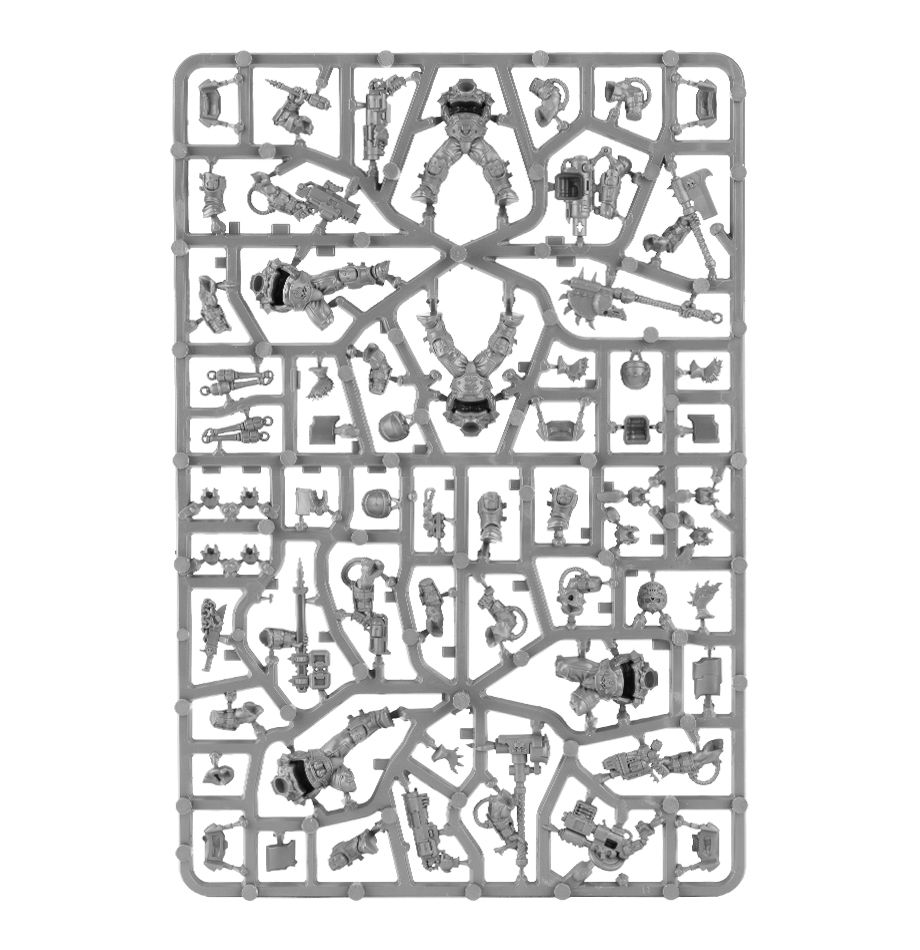 Overall I’m happy with this conversion, though it’s hard for me to judge the Goliath box overall. They’re pretty unsuitable for standard Guardsman/cultist conversions (they stand on the larger 30mm space marine bases), but I would be happy to be proved wrong. I suppose they could make a splash as Khornate chaos cultists, but the issue there is WYSIWYG – there is a tragic dearth of pistols in the Goliath box (just two stub guns. TWO!) The gnarly axes and repurposed tools put me in mind of some genestealer hybrid potential, but that will take further experimentation.
In conclusion, I am very excited about the Necromunda gang boxes. I have more examples of potential painting, head swapping, and kit-bashing on my table, and will present them (as well as further analysis of the kits used) in the future.